Continued from our last post about Fury, our adorable cat…

As we returned to the vet for check-ups at both our local vet’s office and CSU in Colorado, we began to notice her hair falling out where her skin was scabbed from injuries. We still hadn’t gotten a look at the healing injury on her back, as it was re-wrapped weekly by the vets we saw. But the entire back of her neck lost all of it’s hair after we observed what we’d call dark red irritation bruising that crept up her skin after the horrible back injury. She also developed 2-3 thick, crusty “scabs” near her shoulder blades that ultimately could be peeled off, gently, only to leave a powdery white space that became gray and speckled in coloration and never grew hair back. It was surprising that the vet could peel these scabs off and Fury would barely feel a thing.

Several weeks later, the local vet determined that her skin wasn’t going to be able to heal the entire way on its own and after nearly 2 months of healing and body bandage re-wraps, they would have to debride this area and leave the wound open to heal on it’s own. This wasn’t a pleasant thing to see or look after, but our vet was right; it did ultimately heal after several more weeks. 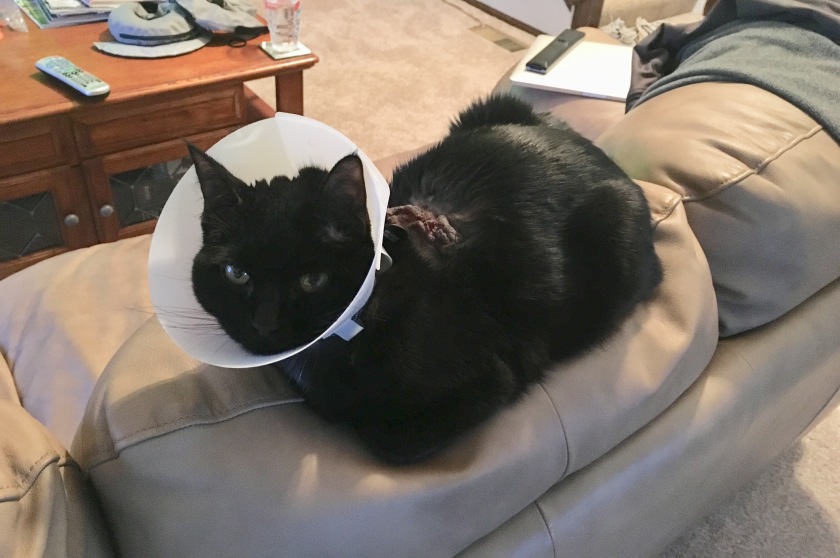 We next moved into the phases of medication investigation. We started with explorations of steroids, anti-seizure meds and other regimens that our vets have experience with in certain situations. I’d caveat this though to clarify that our vet team was great at finding doses that were tolerable without adverse reactions. The progress was obvious after several weeks: Fury was no longer having those frantic states of sprinting out of the room, looking like she was hallucinating or attacking herself. For several weeks at this point, we really felt like we were heading in a better direction (granted we wished we could snap our fingers and make it instant, but still, we were hopeful).

The progress was obvious after several weeks: Fury was no longer having those frantic states of sprinting out of the room, looking like she was hallucinating or attacking herself.

Despite being on some medications that are technically anti-seizure drugs, Fury had a random spurt of four seizures in July 2018. Never lasting more than 30 seconds to a minute in duration, these were a game-changer for us thinking we had entered into a phase we couldn’t allow to continue.

We were directed to have a Neurology consult and this began to make us feel even more that we were crossing some sort of line regarding quality of life (dermatology visits and check-ups are one thing – neurology is very different). We were advised then that with idiopathic seizures (which was the vet’s best guess as to what Fury had), there isn’t much that can be done without putting an animal into an MRI, which would require general anesthesia (and there was no guarantee that anything would be identified from a brain scan). On the other hand, there was the possibility that something definitive could be found that would answer all of our questions.

Fortunately, as suddenly as they started, the seizures stopped. This brought us great relief. We decided that we would not want to put Fury through something on the scale of an MRI and anesthesia unless we were confident it would result in a valuable knowledge return for what she would go through (and no one could give us that confidence at this point). We all agreed that unless Fury began to have the seizures again, we’d hold off on any procedures that invasive.

During this year, my husband and I watched Fury. My work allows me to operated out of my home office, so it’s been extremely important to have that ability to monitor Fury so carefully, as she’s always with me. We, then and now, continued to assess what is in Fury’s best interest. Is she declining or consistently showing signs of unhappiness, fatigue or is there any sign at all that this is too much for her (or for us rather than her).

At each stage we’ve had these conversations, we also asked our vet team to advise us on their thoughts too. We have continued to agree that while some animals where cones and scratch at them, try to pull them off or otherwise act with frustration, this is not Fury. Amazingly, our little wonder cat has been very easy-going about everything she’s been through. We continue to watch her for any signs of decline but her eyes and personality continues to be bright. She has been very active throughout this year and even in her bandages and cones, she still sprints after ice chips like a hockey player with a puck on our kitchen floor, chases after balls, jumps in our laps at every opportunity and snuggles in our bed with us at night. She eats extremely well and drinks normally, so with her best day-to-day feeling in mind, we are continuing on.

Unless otherwise stated all images and words belong to this blog’s author. Please do not use or take without my permission. A link to your blog or website is always appreciated and thank you for respecting my copyright.