After making an introductory post about our cat Fury, I wanted to start documenting several medical challenges with her that we are working through. There is little  information out there (for pet owners or veterinarians) for animals like Fury and hopefully, by maintaining her story online, it can be one more source for cat owners (and other animal owners) that struggle with these conditions:

Earlier this spring, we noticed that as Fury grew, she often scratched aggressively behind and below her ears with her back feet. It was just, a bit much. Minor injuries began to occur as slices or tears of the skin below where her ears met her neck. These were usually enough to require a small number of stitches or glue to close back up again.  Our local vet was very investigative when it came to these injuries. Yet without any presenting symptom other than itching, we didn’t really have any clear diagnosis other than to begin assessing skin allergies.

We began to notice other odd behaviors as well over the weeks. Randomly, Fury would be in the room with us, and out of nowhere, she would enter a moment of frantic agitation. One second she’s fine, the next her pupils were dilated, she postured as if she was ready to enter fight or flight mode and she would sometimes dash out of the room for no reason at all. In fact, it almost seemed as though she was hallucinating. And just a moment later, she’d flip an invisible switch and be entirely back to normal again.

We started searching online for any guidance of what we could be dealing with and we started seeing feline hyperesthesia syndrome (or “Twitchy Back” syndrome). It seemed to perfectly align with most of her behavior but didn’t account for other behavior. We also noted from reading and in discussion with our local vet that this was a diagnosis only arrived at after ruling out many, many other diagnoses first, so this was put to the side until we could confirm more.

For most cats, if you stroke all the way down their back, they will sometimes flex a bit or arch at the end of their spines (either to lift up to meet your hand or maybe slightly twitch a bit just there on their spine). But this was definitely not that. I would describe this as defined muscle spasms. Mostly these spasms were minor – but you could see them, and every time they happened Fury would focus her grooming attention as if she wanted to nip at something there.

It was about April of this year when, in the midst of that conversation about allergies, and a frank lack of answers at what was going on, a significant injury occurred.

I keep a cat tree by my home desk for Fury that allows her to watch the birds at window level while I work (it’s about five feet tall) and I remember looking just a few inches left to see her grooming her back area between her shoulder blades quite aggressively. It was clear something was bothering her and even when I would gently insert my hand between her mouth and her back, she still would push me away and twist herself nearly in half trying to groom that difficult to reach spot. I decided to take a video to show our vet what I was observing. A moment later, I took just 3-4 seconds to glance back at my computer and again at Fury, and she had literally opened her the skin on her back.

In the frantic state of grooming I saw her in, she had bitten open a portion of the skin on her back between her shoulder blades roughly 1.5” x 2” (which on a small kitten not yet a year old, is a large laceration). It was to the muscle layer, but there was no blood. Her pupils were the size of saucers and she was frantically glancing around as if looking for an oncoming attack from something invisible. This was very, very wrong. I yelled to wake up my husband. He gently held her still while I grabbed an inflatable collar we had used on Fury previously for a prior injury.

This was very, very wrong.

After an emergency vet call and dash to their office, Fury was sedated, cleaned, shaved around the wound and stitched back together.  The wound was so large after being cleaned, the vet team had to wrap medicated bandages around her abdomen and shoulders, like a miniature life vest, to be able to keep it protected.  She began wearing a cone full-time at this point.

Wisely, our local vet suggested Fury’s issues needed specialized support and she began to reach out to pathologists and dermatologists and ultimately, began a working relationship with neighboring Colorado State University’s Teaching Vet Hospital (one of the top hospitals in the country).  It was agreed by several professionals we had something unique going on here, but without further assessment in person, no one could say with certainty what was causing Fury so much discomfort that she would self-harm.

This brought us to CSU’s Dermatology Department for a consult. The team there examined Fury with kid gloves, discussed her history with us in detail and came to the point of indicating she likely had Ehlers Danlos disease, an unknown skin allergy, vasculitis and likely a degree of neuropathy damage as well. Not only was Ehlers Danlos in cats very rare, but also in concert with a potential skin allergy and the vasculitis/neuropathy included, there just wasn’t really any documentation or history in veterinary science to work from confidently.

The vet there showed us that Fury’s skin, if you gently held it, could be stretched nearly 5 inches out from her frame. I’d never seen anything like that before. And I want to stop right here and be very clear – this is not just gently nabbing your cat’s skin and tugging – this is a professional procedure that the vet knew how to do correctly, so PLEASE DO NOT try this on your own cat under any circumstance. It was obvious, even with the vet’s expertise, this was not comfortable at all for Fury.

We also learned that Fury’s skin was damaged on a microscopic level. Her collagen was not at all the normal or structured in a healthy way when viewed on a microscope slide. As the team educated us, Fury had paper-thin skin, due to this lack of healthy collagen, and was so fragile to the touch that simply scruffing her by the neck could cause life-threatening tears or injuries. We also suspected that she had permanent nerve damage due to the ongoing discomfort and itching as well as the inability to heal as quickly as healthy cats. (This began to explain a lot regarding her lack of bleeding when injured and lack of heeding of pain). 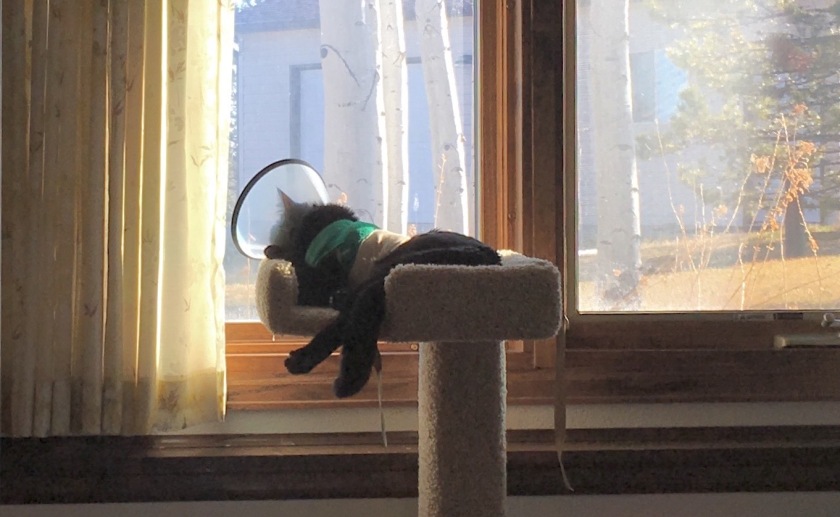 We had a very frank conversation with our vet team where we basically established, that we would continue to search for solutions for Fury so long as she had a very good quality of life (was “bright” in her eyes, ate well, drank well, played well, snuggled well and for all intents and purposes, remained her cat self). But if that changed at any point, we would revisit what was best for our girl.

Unless otherwise stated all images and words belong to this blog’s author. Please do not use or take without my permission. A link to your blog or website is always appreciated and thank you for respecting my copyright.